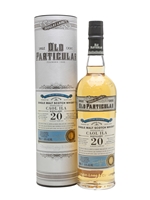 1996 was a good year for independent bottlings of Caol Ila. This release from Douglas Laing is intriguingly complex with notes of golden syrup, Demerara sugar, sea salt and smoke.