The Whisky Boys received an invite to be the guests of The BIG Partnership, Edinburgh the PR Company for the Famous Grouse brands. Both Jim and Nicola were once again going too meet up with Rosie Niven and Kat Drew who are Account Executives with The BIG Partnership.

Due to various commitments Jim and Nicola could only manage to go to the Saturday event, but friends o 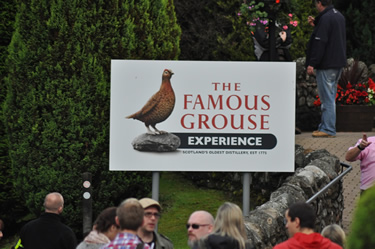 f ours who live in Crieff went on the Friday and both said it was one of the best day’s out that they have had in a long, long time.

So it is Saturday the 13th of August and The Whisky Boys (Jim and Nicola) headed up to Crieff and Jim’s wife, Jacqueline was glad to be our nominated driver for the day. On arrival at the Festival around 5.30 pm Jim and Nicola headed for the Press Office where they were given their Press Passes for the day and met up with and had a short chat with Rosie and Kat.

Jim and Nicola at first had a wee wander round to see the layout of the festival, on stage was the fabulous Mànran who many of the audience up and dancing to their exciting style of music, six young guys with Accordion, Fiddle, Flute, Drums and the only band to use both Highland and Uilleann pipes and this creates a wonderfully haunting and exciting sound.

Jim and Nicola continued to wander around the Distillery and visited the shop which was open for business, after that little visit it was of to the VIP room for a light refreshment and a snack whilst listening to Mike Lee. Nicola had a Ginger Grouse and Jim had a dram of the wonderful Naked Grouse.

Next on the main stage was Skerryvore a band originating from the Isle of Tiree, both Jim and Nicola have heard and met this band a couple of years ago when they played at the Islay Whisky Festival, and once again the audience were on their feet to this band electrifying style of Scottish music, great band if you get the chance do go and see them. 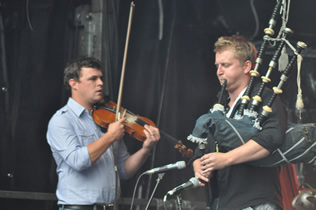 ail masterclass. Gordon Motion who is the Famous Grouse’s Master Blender took us all through the various drams for tasting, 7 in all including new spirit and Gordon held the audience’s attention and gave one of the best descriptions and history of Scotch Whisky (all done with a slice of humour thrown in) that Jim and Nicola had heard for a long time.

Next to take front of stage was Andy Gemmell who took the cocktail masterclass and produced three smashing cocktails using The Famous Grouse and the Black Grouse, most of the audience including Nicola went up to the stage area and had a little taste, Nicola loved all three. These two classes were excellent whether you were a seasoned Whisky lover or just beginning your journey into the wonderful world that is Scotch Whisky.

Up next on the main stage was Jill Jackson and her band, she has been given the nickname of “The Scottish Songbird” by the Nashville press and this singer/songwriter who comes from Paisley has quite unique style to country music and had everyone either dancing or tapping their feet, great to listen and watch.

Jim and Nicola continued there trip around the Distillery and at one point were stopped by a presenter from Celtic Music Radio who are based in Glasgow (their station is on 1530am) and asked us many questions live on radio, how much were we enjoying the day? what was our favourite dram and what had we tasted today? So we had a wee blether with the presenter and told him we would tune into his station and have a wee listen to his style of progra 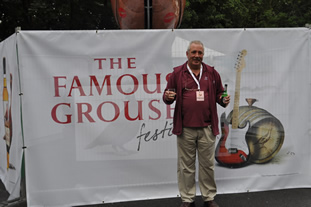 Just before Jim and Nicola had to leave they were able to hear a couple of songs from the
headlining act Glasvegas, they sounded terrific and The Whisky Boys wished they could
have stayed longer.

The Festival site had much more to offer including the Food Forrest, Memorabilia stall, Sampling tent and an indoor bar.

This was a great festival, the drams (all fabulous), the music and the atmosphere was electric everyone we spoke to told us that they were having one of their best days out for a while.

So hear is hoping it is on again next year, if so it will be in the Whisky Boy’s diary and written in indelible ink as a must go to.

To finish Jim and Nicola have to give a BIG THANKS to Rosie and Kat of The BIG Partnership for the kind invites and to all at The Famous Grouse/Glenturret Distillery for a well organised and memorable two day festival, and the kind hospitality offered to the Whisky Boys, thanks again,