My son in law Scott, also known as Whisky Boy Nicola’s husband and the Apprentice Whisky Boy, has dec 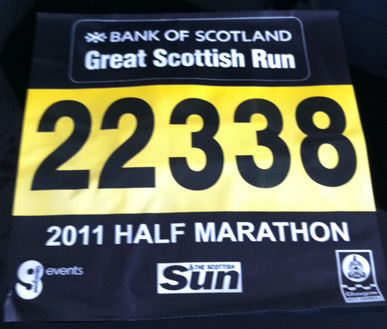 ided to run the Bank of Scotland’s Great Scottish Run, 2011 Half Marathon in Glasgow on the 4th September to raise money for Diabetes UK Scotland.

Scott has been Type 1 diabetic for almost 8 years, this means he controls his Diabetes with insulin, not tablets or his diet. Running the 13.1 mile circuit will be a real challenge for him as he also has to manage his blood sugar levels whilst running, to avoid any hypos.

As a trainee Whisky Boy, Scott has accompanied me to a couple of Distillery Visits as well as our Whisky Trail Course at the Glasgow College of Commerce, keep an eye out for more news on this as we have now registered for the Advanced Whisky Trail course that starts mid September (if Scott survives the half marathon).

The Whisky Boys are asking our readers that have or know someone who has Diabetes to visit Scott’s Just Giving charity page and make a donation to this great cause. Scott is only looking to raise another £200 as he already raised £490 in June of this year when running the Mens Glasgow 10k.

I will keep you posted on how Scott does during the race and total funds raised for Diabetes UK Scotland.

Remember, if you make a donation, let Scott know it was the Whisky Boys who sent you!!!