The Whisky Boys have just received this press release from one of our favourite distilleries, and believe it or not Jim and Nicola are planning a wee whistle stop Highland tour which we hope to include Dalmore, Pulteney and Highland Park distilleries. These are three distilleries that are a must for all Whisky lovers.

This new release looks grand and we hope to have a wee taste of this very soon. Again well done to all at Highland Park.

The long-awaited and much anticipated third, and final, edition in Highland Park’s Magnus Series has now been released. Earl Haakon continues the story from the Orkney Inga Saga but reflects the darker, more sinister character by bringing the murderous cousin into the spotlight.

Whilst the first two bottlings in the Series celebrated the influential 11th century Earl Magnus who was canonised to become Saint Magnus only 20 years after his untimely death, his cousin Haakon was far closer to the warmongering and violent Viking of legend. It was in fact Haakon who ordered the death of Magnus under the most deceitful and murderous of circumstances. 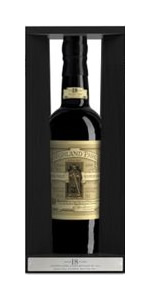 Highland Park Earl Haakon adopts the character of its namesake through 18 year old cask strength single malt giving a character-busting ABV of 54.9%. This Orcadian beast encapsulates the spirit of Haakon, a true berserker and warrior, to capture the depth of flavour of Highland Park’s multi-award wining 18 year old but adding a new dimension achieved through one vatting. With only 3,300 bottles available worldwide, this third edition is set to sell out in record time and build on the success of both Earl Magnus and Saint Magnus.

Gerry Tosh, Head of Brand Education, Highland Park, “Both previous bottlings began the storytelling but the introduction of Earl Haakon brings the Saga to its climax and signals the end of the Highland Park Series. This 18 year old cask strength beast is both complex in flavour and bursting with powerful character. This combination will undoubtedly appeal to our fans and I’ve no doubt that Earl Haakon will become a legend in the history of Highland Park.”

He continued, “The story of Magnus and Haakon is truly legendary in Orkney. The two were joint rulers of Orkney for a period of peace and harmony however things changed and they become enemies. Legend has it that the two agreed to meet for a peace meeting but the treacherous Haakon sailed up with eight fully-equipped warships, outnumbering Magnus and sealing his fate. Haakon had won the battle for supremacy over Orkney but it is Magnus who is remembered today. “

The Earl Haakon bottle is entirely black glass, made in the same historic way as the previous two bottlings, and is presented in an open black wood window wooden gift box.  Earl Haakon will be available from specialist independent whisky retailers throughout the UK, the Highland Park distillery at a RRP of £160.

If you are lucky enough to get your hands on one of the 3,300 bottles available, please let the Whisky Boys know.  In the meantime, why not try the Highland Park St Magnus 12 Year Old Edition 2, this fine dram can be purchased using the window below.