Below is an official press release from our friends at Bruichladdich:

The Organic
Once Again Dram and Land United 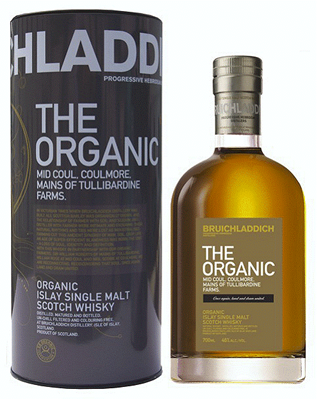 Based on the Bruichladdich Organic 2003 vintage, matured in American oak casks (both used and new wood), it was created by head distiller Jim McEwan as a multi-vintage bottling – each of the three origins harvested, malted, distilled and matured separately – for ultimate complexity.  The strength was reduced to 46% with Islay spring water, bottled non chill-filtered, caramel-free and certified organic by the Biodynamic Agricultural Association.

Distillery MD Mark Reynier said “This is extra-ordinary stuff. Though young it has a highly individual character: itʼs intriguingly layered with astonishing definition, an intoxicating intensity, extraordinary purity, and a finish that is simply to die for. Itʼs one of a kind.”

“Bruichladdich commissions the largest volume of organic malting barley of any Scotch whisky distillery. there are only three Depending on harvest, almost half our annual barley requirement is now organically grown on Scottish farms.” The Organic now forms one of the central planks of the definitive Bruichladdich range. It retails at £34. Uk distribution: Blavod. Exports: andrew@bruichladdich.com.