We have popped over the Irish Sea for this months blend. 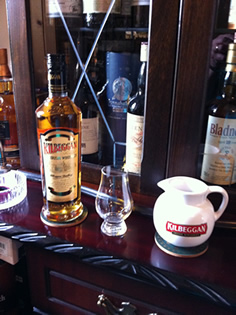 Jim had a fabulous trip to Ireland in June of 2010 and the highlight was a visit and some extra special tastings at Kilbeggan Distillery, see Jim’s blog for all the details.

Jim would recommend that our readers visit Kilbeggan’s website for all the information you will need and have a video tour of the distillery with Brian Quinn, the distillery manager.

Philip Giles who has been a guest taster on a few occasion’s and comes from Northern Ireland visited Jim recently and brought over a couple of Irish Whiskies and one of these was the Kilbeggan, so we now have another dram to add to our list for a future tasting.

This dram and other Irish Whiskies can be found in your local specialist Whisky shop and on-line by using the window below:

Kilbeggan Irish Whiskey has recently been given an big brother with the launch of our Kilbeggan 15 Year Old, which was released to mark the 250th anniversary of the Old Kilbeggan Distillery.