New Packaging for Malts from The Glenlivet Distillery

This is a press release for the new packaging for that wonderful range of Malts from The Glenlivet Distillery.  Both the Whisky Boys like the new, elegant and prestigious look. Well done all at Chivas Brothers (Pernod Ricard).

The Glenlivet, the world’s No 2 single malt Scotch whisky, has revealed striking new packaging to provide the ‘single malt that started it all’ with an enhanced luxurious and sophisticated look, in line with its position in the super premium spirits category.

The new packaging to be implemented across the core range, comprising The Glenlivet 12 Year Old, Glenlivet 15 Year Old French Oak 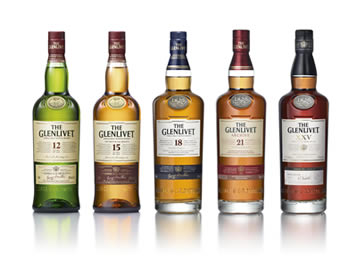 Reserve, Glenlivet 18 Year Old and Glenlivet Nàdurra 16 Year Old, will remain recognisably The Glenlivet, yet offer a more contemporary, elegant look. Available in all markets including duty free, the new bottles are enhanced with higher shoulders, a shorter neck and an enlarged base giving them a stronger presence, while the embossed stamp of the whisky’s founding family ‘George & J. G. Smith’, continues to portray the legacy and heritage of The Glenlivet. As a strong point of reference for consumers, the cartouche, which indicates the brands history dating back to 1824, has been given a more prominent position on a raised platform.

The Glenlivet 12 Year Old bottle will retain its iconic green colour, recognised by consumers the world over, while the 15 Year Old French Oak Reserve will move to a clear bottle for the first time to showcase the rich golden colour of the whisky. Both expressions will be presented in a new, luxury carton with premium cues to increase gift appeal, while additional information highlighting the whisky’s quality credentials will benefit both aficionados and new drinkers.

The packaging upgrade has seen The Glenlivet 18 Year Old elevated to align with the ultra-premium and prestige expressions within the range including The Glenlivet 21 Year Old and The Glenlivet XXV. Changes to the 18 Year Old bottle design, including the heavier base, signify its status as the most awarded expression in the range and the whisky favoured by many distillery workers. The new bottle is housed in a significantly upgraded permanent gift box. 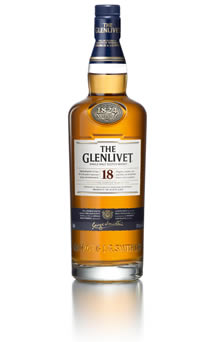 In addition, The Glenlivet Nàdurra, the non-chill filtered expression in the range, will also be presented in a new, bolder bottle and feature the logos and icons seen across the range while maintaining the individual character of the artisanal, highly crafted whisky.

Neil Macdonald, Brand Director for Malts at Chivas Brothers, comments: “The Glenlivet is recognised by whisky aficionados around the world as an exquisite, premium whisky, and our new elegant packaging will confidently reflect this quality with its striking new shape and luxury cues.

“The stylish bottles and gift cartons will offer increased on-shelf stand-out for the on and off trade and will support our ambition to see The Glenlivet become the No 1 selling malt whisky in the world.”

Since 2005, The Glenlivet has been the biggest contributor to the global single malt category and is only the second single malt to achieve sales of over 600,000 9l cases. In 2010 The Glenlivet completed its £10 million distillery expansion increasing production capacity by 75% to meet global demand.