It’s a Thursday, nothing unusual in that, except it is a beautiful day, in Scotland that is really the exception ! As said, it is a truly gorgeous day and I just had to get out for a while in my lunch hour. I don’t know if I have mentioned, but I work in Stirling in Central Scotland. The sun is shining, it is about 20 degrees and there is a cool breeze to refresh you, really pleasant conditions. 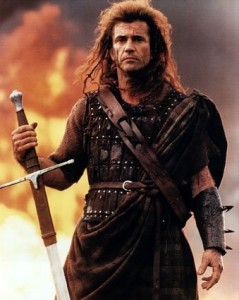 I know that all of us so often take the same routes day in and day out and so often be become immune to what is around us. I don’t know if it is the weather today, the way I am feeling or if there is some divine intervention, but today I feel even more proud to be a Scot. As I turned out of the Business Park where I work I could clearly see the magnificent site of the Wallace Monument, standing proud with the backdrop of the Ochil Hills. The colours of the hills were acutely defined with a contrasting cloudless blue sky and in the middle of the scene stands the Victorian gothic monument to one of Scotland’s greatest hero’s.

Unbelievably the monument – all 220 feet of it, was paid for by subscriptions and cost in excess of £10,000. It was from this prominent hilltop in 1297 that William Wallace watched the English army approach across Stirling Bridge before leading the Scots into the battle of the same name: and victory. He was quite a man (actually a bit taller than Mel Gibson, and probably not as good looking) n.b. I do think Mel managed to capture the essence of how many Scots feel about their country.

So on with my lunch break – the above is a description of my view to the left, on the right standing tall and imposing is Stirling Castle. The Castle is perched upon a huge rock and stands high above the flat lands – I believe strategically built so that the Castle could watch for attacking troops. A few years ago the Castle underwent a refurbishment and the Great Hall (where Mary Queen of Scots was Christened) was painted in a yellowish/gold colour, apparently close to the original colour, which allows you to see it from miles away. At night the Castle is usually floodlit and looks quite a sight if viewed from the motorway. So here I am gazing at the lazy sheep grazing in the flatland fields which run up to this huge rock with a Castle on top of it. I think I am very lucky to have such amazing history, such amazing weather and so much exposure to the passion that is an integral component of every Scot – not bad for popping out in my lunch break.