They say that little boys are made from Frogs, Snails and Puppy Dog Tails. Well when God made Sean Connery he just used the Puppy Dog Tails (only the beautiful ones). Equally over the years I have encountered many boys that have just comprised of the Frogs and Snails end of the market not to mention all the other detritus that was part of their make up so it is understandable that Sean got more than his fair share of the Puppy Dog Tails. 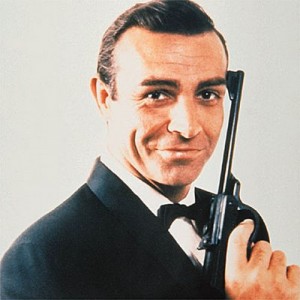 As anyone who knows me will confirm, I have adored Sean Connery since I was 10 years old and my parents took me to see From Russia With Love – it was my 10th birthday treat. That was it – signed sealed delivered I was his for the asking – needless to say he never called (yet !!!).

I have avidly watched him in James Bond movies, The Hill, The Man Who Would be King, Family Business , The Rock, Indiana Jones etc etc – when I went to see Prince of Thieves which Sean is only in at the very end the whole cinema gave him a round of applause when he appeared on screen (quite right !!). So as you can see I have probably watched him in just about every film that he ever made. For the record, my favourite Sean film is Robin & Marion for which I have been known to start weeping when the film opens looking at two apples on a wall – I know I am sad, but nothing reduces me to an emotional heap like Robin & Marion can.

Way back in July 1999, Jim suggested that we go through to Edinburgh for the day to see the historic reopening of the Scottish Parliament. There had not been a Scottish Parliament since 1707, so this truly was a historic event. There was a wonderful carnival atmosphere in Edinburgh that day and we decided to get a really good view and positioned ourselves against a barrier close to the Mound. The ceremony began with the Duke of Hamilton carrying the crown of Scotland on a velvet cushion. We watched and waited for the Queen, Prince Philip and Prince Charles to arrive in their open carriage and join all the politicians and dignitaries for the ceremony. One of my fondest memories from watching the televised ceremony was Sheena Wellington singing “A Man’s A Man For A’ That”, a wonderful song from Rabbie Burns with a sentiment which is still very valid today. So sure enough, The Queen arrived in her carriage, we

aring a really gorgeous purple and green outfit, and entered the temporary home of the Scottish Parliament.

Once the ceremony was over again the Royal group headed up the hill towards Holyrood with all the politicians, religious leaders and guests walking behind them. Donald Dewar gave a little dance of delight as he passed, again another wonderful memory of the day.

To paraphrase a quote from Robin & Marion, “I knew I would never have another day like this”. There he was, about 6 ft away from me, waving, smiling and responding to shouts of “Big Tam” in his ruff and kilt (all green and gorgeous), Sean can fair wear a kilt! I have never experienced anything like it. I was reduced to a complete imbecile. The only word (a very old Scottish word) was Glaikit. I had a stupid dazed smile, I was incoherent, immediately needed the loo and just grinned (and I really mean grinned for a whole 6 hours) the man walked passed me in about 4 minutes and I was left paralysed by stupidity for that length of time. During this 4 minute walk I managed to get a photo of him which to this day lives inside my cupboard where the tea and coffee live in our house, so I have a chat with him on a daily basis.

The whole day was exhilerating to be less than six feet away from Sean.  Now,  on occasion I have been heard to say to Jim  that he has a few things in common with Sean, they are both Scottish, both have dark brown eyes, both have grey/silver hair but I have to remind him he is not a multi-millionaire, movie star Adonis ( guess he is carrying too many Frogs and Snails.)

Although Sean is 26 years my senior, he is still my movie star hero!