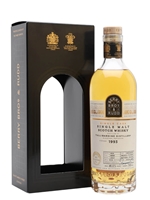 A 1993 Tullibardine single malt from independent bottler Berry Bros & Rudd, matured for 28 years in a single hogshead, before being bottled in 2021 as part of its autumn releases. Aromas of lime zest, green grass, wood smoke and vanilla custard fill the nose, complemented by notes of white pepper, banana, lychee, grass and furniture polish throughout the palate.