It is still that cold and windswept evening on the 1st day of September, but Nicola has gone home and only Jim, Dougie and our guest taster Bruce still remain. ( see Macallan Select Oak tasting for more details.)

Going back to an earlier guest taster Philip Giles from Northern Ireland, we decided to bring out the last bottle he brought over, but did not get a chance to taste whilst Philip was here. I am sure he wont mind if we taste it now. 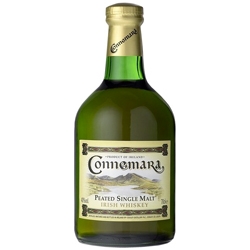 Before coal was widely imported to Ireland the local natural fuel of peat – or turf as it’s also known – was used extensively in the distillation of whiskey to dry the cereal crops used and to fire the still. Over the last century this ancient practice was lost until Cooley revived this tradition and released its range of Connemara Peated Single Malts. Connemara is Cooley’s most celebrated whiskey winning a Gold Medal in every International competition it has ever entered.

Inspired by the distillers of scenic Connemara region in the West of Ireland who used peat extensively due to the abundance of peat in the region, Cooley is the only Irish distiller to make Peated Single Malt. This process results in the whiskey having a distinctive smokey/peaty signature that has recently been more associated with Scottish whiskey from the island of Islay. Connemara manages to retain the smoothness and sweetness of an Irish whiskey accompanied with the distinct smokiness from the peat creating a truly unique Irish whiskey.

Let’s all go in for a tasting.

Nose…Smoke and peat, dried fruits but with much, much more in there.

Taste…Peat and smoke to the front.

Nose…Lovely touch of smoke and faint pear drops and a wee hint of saltiness.

Taste…Rich mellow sweet smokiness with that pear and salt again.

Finish…Long, sweet with that hint of smoke at the back.

At this point we have to admit we let Cathie (Dougie’s wife) have a taste of this smashing Irish dram.

Cathie gave us her views on her tasting,

Taste…Now I get the peatiness which for the first time, I don’t recoil from. the sweetness has receded.

Finish…There is now a lovely warmth and smokiness.

Jim and Dougie also thought that Cathie did not too bad in her tasting notes, we just might have to give Cathie a wee chance of being an official guest taster and give her a little more experience in all things Whisky. ( nae luck Dougie, the wife’s taste and expense in Whisky has just gone up).