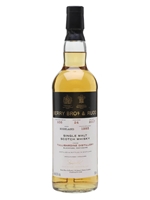 Distilled in 1993, this Tullibardine whisky has been matured in a single cask for 24 years before being bottled by Berry Bros. & Rudd in 2017. This Highland single malt has rich notes of vanilla and honey alongside apricot and peach.