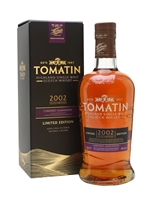 One of three limited-edition releases from Tomatin in September 2016, this was distilled on 25 January 2002. Aged in hogsheads for the first nine years, it was finished for the final five in Cabernet-Sauvignon-wine casks. This whisky is full of red-fruit and honey flavours.