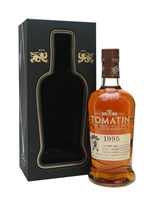 The oldest of three Tomatin limited editions released in September 2016, this was distilled on 16 June 1995. Finished for the final three years in oloroso-sherry hogsheads, this is a rich and waxy whisky with notes of dark chocolate, honey, wood spice and dried fruit.