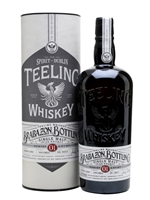 The first in a new series from Teeling celebbrating the spirits of the Liberties area of Dublin where its deistillery is based. This celebrates William Brabazon, 3rd Earl of Meath and has been aged entirely in sherry casks, with 5% from 2001, 5% from 2002, and 30% each from 2005, 2007 and 2008. Rich and sherried with notes of toffee, red berries, liquorice, clove and toasted marshmallow.