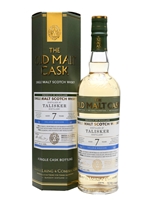 A young, seven-year-old, Talisker from Douglas Laing as part of the Old Malt Cask series. Distilled in November 2009, it was aged in a refill hogshead and was bottled in February 2017. A warming and creamy smoky whisky with notes of dark chocolate, rhubarb and vanilla.