Deanston Distillery – A Re-visit and a New Visitor Centre

Jim had friends over from Ireland and he decided to take them to Deanston Distillery and this would allow him to review the new visitor centre.

It is over two years since The Whisky Boys first visited and did a tour of this delightful Distillery. On that occasion it was the bubbly Ann Shackell who gave us the grand tour. 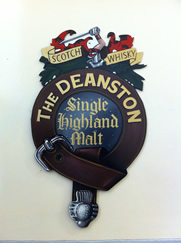 We contacted Peter Semple from Deanston who arranged for Jim, Philip and Lorraine to visit the distillery at around 1.30 on Thursday 30th August and to ask for Fiona Sinclair (Brand Heritage Manager) who in turn would be our contact and guide for the day.

We all arrived at a little after 1 pm, so we popped into the new Coffee Bothy which was fantastic. Huge wooden chunky furniture gave it a very warm and homely feel. We sat down and had a good look through the fine menu, we all had some fabulous and certainly not slimming cakes and Jim had one of the best double Espresso’s he has had in a long time.

After coffee we visited the well stocked shop where we were met by Fiona. Fiona started the afternoon by taking us on one of the new tours, which started with a very informative film on the history of Deanston

This Distillery is certainly not your most typical as it is not whitewashed and there are no pagodas to be seen, its buildings, designed by Richard Arkwrightt (who invented the Spinning Jenny), date back to 1785, when it was a working cotton mill, driven by the waters of the River Teith. In its heyday it employed 1,500 people and housed what was then the largest waterwheel in Europe. 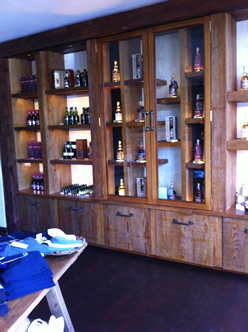 In 1966, the buildings were converted into a distillery, partly due to the plentiful supply of water from the River Teith and the cool humid conditions of the weaving shed, perfect for the ageing of barrel’s of fine malt Whisky.

After a very good tour where Fiona came across as very knowledgeable and enthusiastic for all things Deanston and injected a nice level of humour throughout the tour. The next stop was into Deanston’s new tasting room. This light and airy room was set out with some tasting glasses and all three guests enjoyed some fine drams :-

All these drams are un-chill filtered, as they all should be.  Jim’s favourite was the Toasted Oak closely followed by the Virgin Oak.  Jim and his two guests spent a great couple of hours in the company of Fiona and enjoyed some really smashing drams. 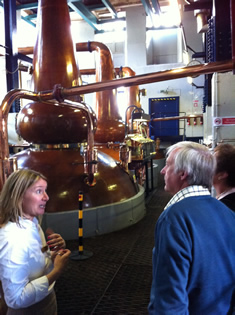 Anyone visiting the local area, i.e. Doune, Callander, Safari Park or just touring must visit this Distillery even if it is just for a coffee and cake in the wonderful Coffee Bothy.

Look up the website and you will get all the information you will need, including tours that range from £8 up to £40 for the Managers Tour, don’t miss out on a great couple of hours and a sip of a great Highland Single Malt.

A BIG THANKS goes to Peter and Fiona for a delightful tour and some fine drams, the new Visitor Centre and The Coffee Bothy are excellent and it looks like no expense was spared in the construction. With the addition of the film at the start of the tour gives everyone an insight to the history of Deanston and the surrounding area.