Jim and Nicola left Longcroft at 10:15 am on Friday 12th of February 2010 to take the short journey to the Highland Distillery of Deanston ( approx 35 mins ).

We had made contact earlier with Ann Shackell from Deanston Distillery to meet her in the reception area at around 11 am, as she was going to be our guide for the day.

We duly arrived at the Distillery which is quite impressive as it sits on the banks of the River Teith, on the edge of the Perthshire town of Doune, we entered the reception and was met by an enthusiastic and bubbly lady who it turned out to be Ann our guide.

This Distillery is certainly not your most typical as it is not whitewashed and there are no pagodas to be seen, its buildings, designed by Richard Arkwright (who invented the Spinning Jenny), date back to 1785, when it was a working cotton mill, driven by the waters of the River Teith. In its heyday it employed 1,500 people and housed what was then the largest waterwheel in Europe.

In 1966, the buildings were converted into a distillery, partly due to the plentiful supply of water from the River Teith and the cool humid conditions of the weaving shed, perfect for the ageing of barrel’s of fine malt Whisky.

After the usual introductions the three of us set of for a wander around the grounds and buildings of the Distillery, Ann at all times giving a well informed commentary of the history of Deanston Town, the cotton mill and of course the Distillery.

We were shown round the Distillery, taken to all the important area’s dealing with, Malting, Grinding, Brewing, Fermentation and of course the Distillation all included with an expert commentary by Ann.

Part of the tour included a visit to the building that housed the waterwheel which gave all the power the cotton mill needed in days gone by, and believe it or not, there is still some fantastic old machinery in perfect working order – a testament to the quality of workmanship by engineers in years gone by.

After our guided tour we returned to the lounge / reception area where the shop is also located.

Ann gave us a little tasting of the Deanston 12 year old, and a fine wee dram it is. Jim then purchased a bottle of same and did mention to Nicola that this has to go onto our list for up and coming tasting’s. 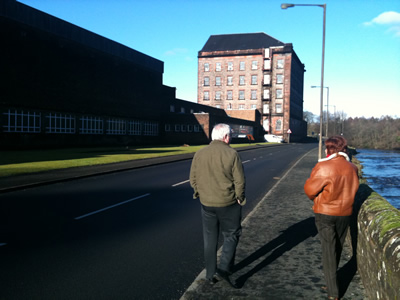 The shop not only had products from Deanston and Scottish Leader ( the blended Whisky from Deanston ) but also had on show and for purchase Single Malts from Bunnahabhain, Tobermory and of course the fabulous Black Bottle blend with the heart of Islay. (did we ever tell you that Jim can see no wrong with anything Islay)

Up and coming is Jim’s visit to Islay for the week commencing Sat 20th of February 2010, where very high on his itinerary is a visit and a tasting session at Bunnahabhain, which in times past has been one of the most hospitable and ideally located Distilleries on the island, with fabulous views from is pier, but that is another story, which will follow soon.

Ann has asked both Jim and Nicola to return to Deanston at the end of March for a more in-depth tour and tasting session, on the condition we bring the third Whisky Boy, Dougie. This we shall do with delight.

We would like to finish with a BIG THANK YOU to Ann for a great wee tour and some of the distilling staff who stopped working for a short period to give us some more insight into the Deanston Distillery.

We would like all our readers to give Deanston a phone or e-mail asking for Ann Shackell and booking a tour and a wee taste, you will not be disappointed.

Here’s looking forward to the end of March, see you soon Ann.