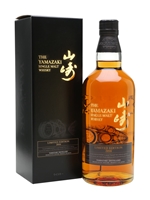 The 2016 release of Yamazaki's annual Limited Edition bottling. A blend of young, bourbon-barrel-aged whisky with older single malt aged in sherry and port casks. This is always a highly sought-after release.