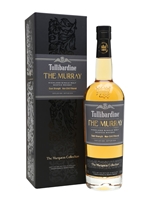 The Murray Edition is a 2004 whisky from Tullibardine as part of the Marquess Collection. Aged in first-fill bourbon barrels for at least 11 years, this cask-strength whisky has notes of citrus fruit, vanilla, malt and pepper.