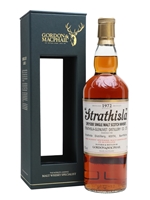 A rich, sweet dram distilled in 1972 and aged in sherry casks until 2013. Bottled by Gordon & MacPhail for their Rare Vintage series, this single malt offers notes of rum and raisin, hazelnut, dark chocolate and marzipan, with additional tropical and citrus fruits, plus cigar ash, when water is added.