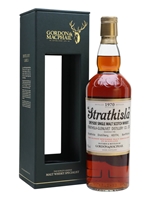 1970 was an experimental year at Strathisla, with some strange bottlings appearing these days, but this is their regular, straight down the line whisky, matured long and richly coloured.