Tonight The Whisky Boys will be tasting an extra special Balvenie – the Tun 1401 Batch 5.

The TUN 1401 gets it’s name from the traditional wooden tun in which select Whiskies are married by Balvenies own Malt Master, David Stewart. David first started to experiment with the marrying tun back in 2010 and is now on to his 5th Batch.  You may remember on a trip to Balvenie earlier this year Nicola was lucky enough to set a sook straight from this TUN…

This batch has 2862 bottles in it’s run and only nine casks were married, sherry buts and American oak hoggies with the oldest coming from a distillation in 1966 and the youngest is 21 years old. 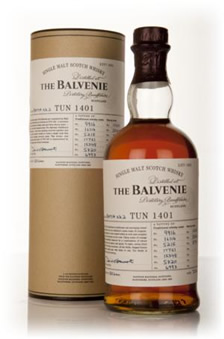 This is a fantastic dram, but there is a but, it will only be available in some European countries and Australia, but you should be able to purchase a bottle or two on-line but you will get only a few pounds change from £200.

Here is hoping that David Stewart continues to marry some fabulous casks and batch 6 being not too far off.

The Whisky Boys can only congratulate David and all the team at Balvenie for their continued superb expressions, hoping to see you all soon.