It was early evening on Tuesday 5th May 2009, all the Whisky Boys (Jim,Dougie & Nicola) were in attendance in Jim’s dinning room, as Nicola had brought along a bottle of Balvenie Whisky – Doublewood 12 Year Old Single Malt for a wee tasting evening.

This distillery has a very good web site and we would suggest you visit it sometime, you will not be disappointed. 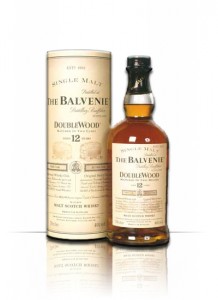 This distillery has a very in depth range as you can see from below,

Plus there are usually other special editions on the go at all times, the website details the current list of specials.

So as usual we all sat around the table glasses in hand awaiting the opening ceremony.

The Doublewood from the name is for the traditional oak casks and then to first fill European sherry casks.

You may notice below that the comments of this tasting are only made by Jim, this is due to both Dougie and Nicola being full of the sniffles and would not be able to nose the dram, but they both sure tasted them.

Nose…Rich, sherry and a wee hint of smoke.

Taste…Fruity richness, cinnamon spice, the sherry is still there as the little bit of smoke.

Finnish…Long and very warm, maybe a wee touch of honey in there.

I can only say what a valuable asset you have in your Malt Master David Stewart the longest standing master in the industry, well thanks David you gave us a great tasting tonight, but it does not end their.

After the three of us sampling one or two wee drams of the Balvenie 12 Year old Doublewood, Nicola asked if we had another wee nip to taste prior to Dougie and Nicola going home.

Well Jim went into his sideboard and brought out a bottle of Monkey Shoulder and we all had a wee dram of this.

Whilst Nicola was looking at the label she noticed that the bottle was signed by the malt master David Stewart, yes you guessed it the same David as above.

We have yet to do an official tasting of this blended triple malt, but once Dougie and Nicola have their noses and taste buds back in full working order this is now very high on our agenda.

Also up and coming is some distillery visits and tastings and shop visits by Dougie on his recent long weekend tour around Speyside, watch this space.

To finish a smashing wee evening of tasting and was pleased to have found the connection between Balvenie and the triple malt blend Monkey Shoulder, David is such a great Malt Master, we are all looking forward to delving into more of his finist distillations.