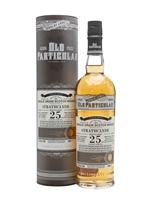 This 25-year-old single grain was distilled at Strathclyde in August 1990. Aged in a single refill barrel, this has a mouth-coating texture and notes of molasses, orange, vanilla and toffee.