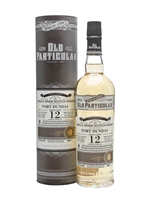 A 2004 vintage grain whisky from Port Dundas, closed since 2010, aged for 12 years in a refill barrel and bottled by Douglas Laing for the Old Particular series. This is warming with notes of honey, blueberries and nutmeg.