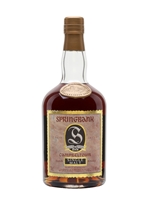 A 30 year old bottling of Springbank. We estimate that this was bottled in the 1990s, meaning it is likely some of the spirit was produced using barley from the on site maltings, which closed for the first time in 1960.

Please note: this bottle contains sediment.
Please note that this is an old bottle and the closure may have deteriorated; care should be taken when opening the bottle. As such, the item is sold as described.