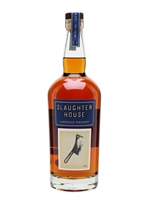 Slaughter House was aged initially for nine years in American oak before being finished in French-oak barrels that used to hold Californian red wine. This whiskey has notes of baking spices, dark fruit, butterscotch and vanilla.