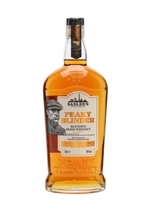 An Irish whiskey created by Sadler's Ales in Birmingham to accompany its Peak Blinder beer. Harking back to Brum's colourful 1920s' post-war past and the Anglo-Irish Peaky Blinders gang, it's a small-batch, triple-distilled, blended Irish whiskey, with balanced fruit and spice. Just the thing to accompany a dark, old-school ale.