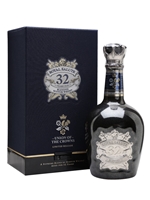 A limited-edition whisky created to celebrate the modern British monarchy, using a blend of single malt and grain whiskies that have been aged for a minimum of 32 years. Union of the Crowns commemorates the accession of James VI, King of Scots, to the thrones of England in Ireland in 1603, thus uniting the realms under a single monarch.

The whisky is presented in a porcelain flagon embellished with a silver plaque and capped with a black stone set on a silver crown. It has rich, fruity aromas and flavours of dark chocolate orange, ginger and soft caramel.