It is now Monday 25th May and we are sitting around the breakfast table, Jim, Jacqueline and our guest Iain. We decided to have a slightly later breakfast and munched on cereal and toast with lashings of tea and coffee, a hearty start to the day. 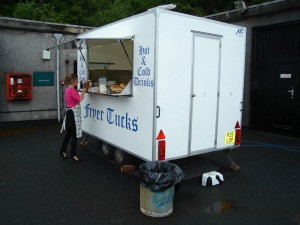 We checked the festival programme and decided to make our way to Caol Ila distillery for their open day.

Well what can we say about Caol Ila – (one of Jacqueline’s favourite Islay malts), but a most disappointing open day, boo hoo. There was no atmosphere, no music, not a lot of people and we had a cup of tea from a van – the hospitality was zilch !! There were people arriving for pre booked tours, but there was no buzz, no excitement and to us no attempt to promote this wonderful Whisky.

We felt quite sad when looking at the evolution of Coal Ila as in 1863 Caol Ila was acquired by Bulloch Lade & Co, of Glasgow, traders in whisky stocks. By the 1880s over 147,000 gallons of Whisky was produced each year.

In 1920 Bulloch Lade went into voluntary liquidation, and a consortium of businessmen formed the Caol Ila Distillery Company Ltd. In 1927 the Distillers Company Limited acquired a controlling interest in Caol Ila, and in 1930 Scottish Malt Distillers Ltd obtained ownership of all the shares. The company eventually became part of Diageo. 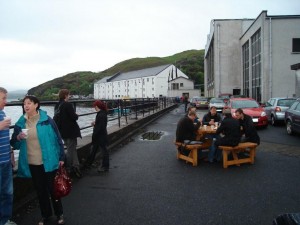 In our opinion Diageo didn’t go to much expense to have an open day which is such a lost opportunity and we feel they should certainly be taking a leaf out of Bruichladdich, Bowmore and Bunnahabhain’s book as to how to organise an open day. The distillery has a beautiful setting looking down the sound of Jura and with a bit of effort an enjoyable afternoon could have been had by us, but instead we had a cup of tea from a plastic cup from a van and stayed no longer than 30 minutes.

From Coal Ila we agreed to head to Ardbeg in the hope of obtaining lunch. The second disappointment of the day, the place was very very busy, with people wondering round the distillery, the well stocked shop and every seat in the restaurant taken. On approaching the restaurant staff we were informed that the waiting time for a table was anything over 45 minutes – by this time we had the munchies. The three of us had a quick meeting and agreed to head off to Bowmore with the intention of having lunch in the Harbour Inn. Result we got a table at the window overlooking Loch Indaal. The Harbour Inn lived up to its reputation of providing excellent seafood and we ate a hearty lunch by this time it was late afternoon. 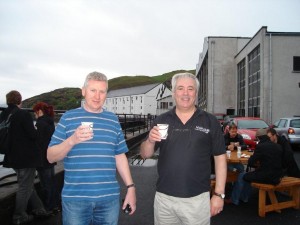 We decided we would return to our accommodation, park the car up for the day and take a walk down to the Port Charlotte Hotel and the Loch Indaal bar for a couple of wee drams. It was agreed we would eat late that evening and enjoy watching a movie or two.

It should be noted that the festival week attracts an international audience and we found that our next door neighbours were from Oslo and musicians at that. Once or twice during the week they accompanied the Mavrick Angels in an impromtu session in the Port Charlotte hotel.

A day of mixed emotions, disappointment at the efforts of Coal Ila, but elation at being on Islay and enjoying yet another fantastic lunch at the Harbour Inn, so night night from us – talk tomorrow.