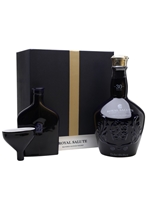 A limited edition of blended Scotch whisky Royal Salute, with packaging created by London-based interior designer Afroditi Krassa, known for her work on restaurants such as Dishoom, Itsu and Heston Blumenthal's Perfectionists' Café. Included in this pack is a porcelain flask, funnel and wooden serving tray, alongside the porcelain bottle of Royal Salute. The design was inspired by the ancient art form of crystalline glazing.