This is the press release for the launch of two new Irish drams, the Irish Distillers are part of Pernod Ricard.

So Jim and Nicola are going to try and obtain a bottle or two and add them to our list of up and coming tastings.

Irish Distillers Pernod Ricard is today launching two new single pot still* whiskey brand extensions as part of its initiative to celebrate the provenance and quality of this unique Irish whiskey style, and to showcase the diverse flavour spectrum of the reinvigorated Irish whiskey category.

Powers and Midleton will join Redbreast and Green Spot as brand names in a formidable new portfolio of single pot still Irish whiskeys emanating exclusively from the multi-award winning Midleton Distillery in Co. Cork. The company has also announced a whiskey development programme with the aim of creating and releasing regular new expressions of single pot still Irish Whiskey across its brand portfolio each year.

“Single pot still Irish whiskey is truly the jewel in the crown of Ireland’s rich whiskey tradition; a tradition which we have carefully 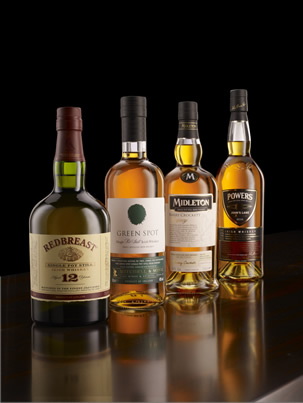 nurtured over the years at the Midleton Distillery” said Irish Distillers Pernod Ricard Chairman and Chief Executive, Alex Ricard. “There has been tremendous interest in single pot still Irish whiskey in recent times so this is the perfect opportunity to rejuvenate and restore this exceptional whiskey style to its former glory. By adding the prestigious Powers and Midleton brand names to our range of single pot still Irish whiskeys, we will offer more flavour variety and create even more interest among whiskey enthusiasts and aficionados worldwide.”

Powers John’s Lane Release honours the silent distillery and spiritual home of the Powers brand at John’s Lane in Dublin. This new expression features a distillate which is true to the pot still style of the original distillery and bears the distinctive honey and spice style that made Powers famous. Bearing a 12 year old age statement, the whiskey has been matured in first fill bourbon barrels with a contribution of whiskey which has been matured in Oloroso sherry butts.

The first ongoing single pot still Irish whiskey to carry the Midleton name – Midleton Barry Crockett Legacy – pays tribute to celebrated second generation Master Distiller who, more than anyone, has shaped with the world-famous Midleton style. Representing Barry Crockett’s personal selection of first fill bourbon whiskeys with the inspired inclusion of whiskey which has matured in unseasoned American barrels, this expression displays a distinctive pot still complexity yet is refined and poised on the finish.

Both Redbreast and Green Spot benefited from the introduction of upgraded packaging in April 2011. The elegant presentation of both the Powers John’s Lane Release and Midleton Barry Crockett Legacy, similarly reflect the growing stature of the Irish Distillers’ growing single pot still portfolio.

All four brands will also bear the Single Pot Still whiskeys of Midleton quality mark on the back label in order to communicate the unique provenance and heritage of the distillery and of these exceptional whiskeys.

Finish: The full spectrum of flavours lasts well into the finish, slowly fading to expose the clean American oak foundation.