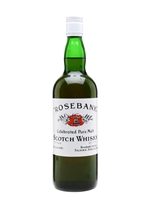 This distillery bottling of Rosebank comes in a thicker than usual bottle as was prevalent at the time of bottling, which, we estimate, was sometime in the 1970s.
Please note that this is an old bottle and the closure may have deteriorated; care should be taken when opening the bottle. As such, the item is sold as described.