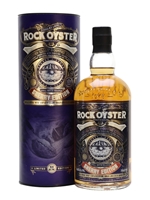 This release of Rock Oyster from Douglas Laing is the first to see some sherry-cask maturation. Finished in Spanish butts, this is sweetly peated with notes of citrus and pepper.