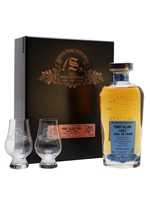 The most anticipated of Signatory Vintage's 30th Anniversary range, this 1982-vintage Port Ellen lives up to they hype. Distilled on 2 September 1982 and bottled after 35 years in a refill sherry butt on 31 July 2018. The sherry cask may be a refill, but it's made itself known in the whisky, with rich bramble fruit emphasising the distillery's tarry smoke and citrusy character. Perfectly balanced.