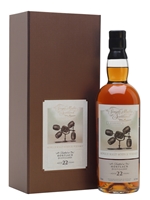 One of a pair of releases showing a different side to the Single Malts of Scotland range – it's a small-batch vatting rather than a single cask. It's four casks of whisky, three ex-bourbon hogsheads and a sherry butt from a couple of different vintages. The sherry butt's huge dried-fruit character has been tempered by the bourbon, but it's still a big and rich sherried dram, with softer orchard fruit and gentle American-oak spice.