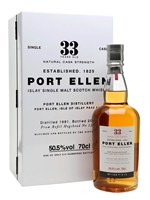 Originally released for travel retail in 2015, just 210 bottles of this 33-year-old Port Ellen were released. Smooth and initially sweet before moving into a coastal and spicy character.