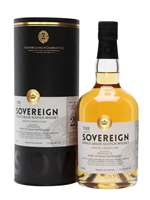 And elegant single cask grain whisky from the lost Port Dundas distillery. After nearly three decades in a refill hogshead, this finely textured grain has emerged rich and smooth with notes of shortbread, toffee and marzipan. For 200 years, Port Dundas supplied grain for blending but in 2011 the plant was closed and demolished shortly after – adding its name to the list of Scotland’s ghost distilleries.