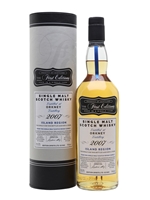 This single malt from an unnamed Orkney Distillery was distilled in 2007 and aged for 11 years in a single refill hogshead. It was bottled by Hunter Laing for the First Editions series. The nose balances honey, toffee and poached pears with citrus aromas. The palate holds plenty of honey notes, alongside a sweet malt flavour and a gentle, smoky hint of heather.