Do you enjoy a wee dram, do you sometimes pay a little extra for that special tipple, then what do you think of this. 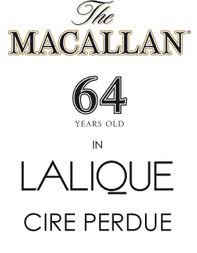 How much would you pay for a wee 10cl measure of The Macallan 64 Year Old served from a unique Lalique Decanter?

Lets start with the Decanter, the world tour of this Whisky is to celebrate the 150th Anniversary of the famous glass designer Rene Lalique’s birth. Out of retirement for the production of this decanter came Lalique’s old an ancient method of “cire perdue” or ” lost wax” way for this one off Decanter

Now for the Whisky this is the oldest Macallan ever to be released in the 186 year history of the distillery. From April this year it has been travelling the world, the cities visited included, Paris, London, Moscow, Hong Kong, Seoul, Taipei, Shanghai, Singapore, Osaka, Beverly Hills and New York. In every city they auction off a 10cl dram of this Macallan and you will not believe the money some of the worlds richest Whisky drinkers paid, now remember the figures we are giving is for a 10cl measure, not for a case load.

The lowest price so far is only was at the first stop, Paris and the dram was purchased for £3,400.00

The highest price paid so far was in Taipei and that dram cost the drinker a staggering £27,700.00 and all the other purchasers in the other cities paid amounts in between and no we did not make a mistake with these figures.

The final question we have to ask if a 10cl dram of this Macallan can cost up to £27,700.00, how much is the full bottle including the unique Lalique decanter?

Do you think that Macallan would give a sample to the Whisky Boys so we could do a tasting and review it on our site? They say miracles can happen.