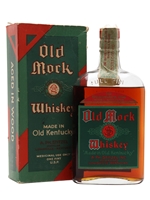 An old bottle of historic bourbon brand Old Mock (though it almost looks like Old Mork on the label). Distilled at distillery no.17 in Louisville, Kentucky in 1916, this was released in 1933, and is a true piece of bourbon history.