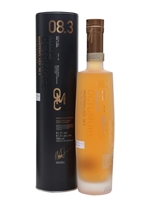 Made from barley grown in a single field on Islay, Octomore 8.3 is one of Bruichladdich's 'super heavily peated' whiskies. So heavily peated, in fact, that this edition produced a reading of 309.1PPM (Phenol Parts per Million), the highest ever recorded at malting. The resulting five-year-old whisky is, unsurprisingly, an intensely peaty dram which develops flavours of dark chocolate, cherry and peach.