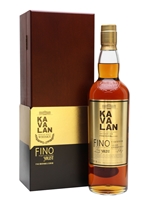 The pinnacle of Kavalan's early production - a whisky matured in Fino sherry casks, rather than the more usual darker sherry styles. Rich with more fresh fruit than you might expect from a sherried whisky.