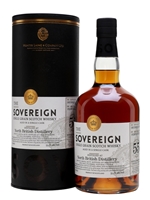 An incredible release from Hunter Laing - a 55-year-old single grain whisky from the North British distillery. Distilled in 1961 this is a demonstration of how malt whisky doesn't have a monopoly on elegance with age. Full of notes of vanilla, apples and milk chocolate, this was awarded the highest mark for a grain whisky from Serge Valentin of whiskyfun.com – 93 points – who called it 'extraordinary'.