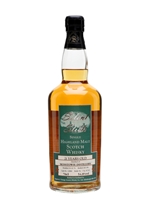 A 1976 vintage Mosstowie, bottled by Signatory as part of their Silent Stills series. Mosstowie was a rare malt that was only produced between 1964 and 1981 when a pair of Lomond stills were installed at Miltonduff to produce it. As a result bottlings of this much loved whisky are highly sought after.
Please note that this is an old bottle and the closure may have deteriorated; care should be taken when opening the bottle. As such, the item is sold as described.