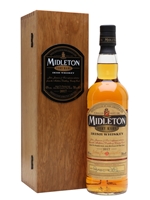 Terrific whiskey from Midleton, part of the Very Rare series that was first created by then Master Distiller Barry Crockett in 1984. This 2017 edition includes the oldest whiskeys used in the blend so far – 26-year-old single pot still whiskey and 32-year-old grain whiskey – and in total the blend ranges from 12 years to 32 year in age, all matured in ex-bourbon barrels.

This is an intensely aromatic whiskey with notes of floral honey, crunchy apples, mangos, vanilla biscuits and a twist of citrus. These carry over into the palate, where they are joined by toffee and spices, most notably ginger. Midleton Very Rare 2017 is a fine dram that would make a superb gift for any Irish whiskey lover.