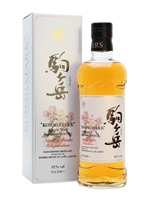 The follow-up to Rindo in Mars's Nature of Shinshu series, this is a blend of peated whisky, some of which has been aged in Japanese-wine barrels. The label represents the cherry blossom that is prevalent around the distillery.