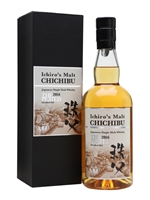 The fourth release of peated whisky from Ichiro Akuto's Chichibu distillery. Distilled in 2012 from heavily peated malt, it's been bottled at 54.5%, giving a bold and intense smoky flavour, with spice and sweetness.