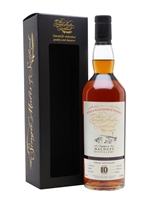 A 2011 Macduff single malt from indie bottler Elixir Distillers that was matured in a single sherry butt for a decade, before being bottled in 2021 as part of its Single Malts of Scotland range. Aromas of prunes, chocolate-covered raisins, Armagnac, liquorice wands, speculoos biscuits and star anise and maple syrup fill the nose, complemented by notes of spiced ginger cake, blackberry jam, whipped cream, walnuts, caramel sauce and cloves throughout the palate.